While at 21st Century Films I met Producer Richard Albert. He had just completed the film "Forbidden Dance." He wanted to produce another film at 21st Century and we entered into an agreement; I would help him shepherd it through the company and in exchange I would direct. The project was entitled "Delta Heat."

I began to develop (writing, producing, directing) some projects with my then partner Corinne Olivo-Levin. We created a slate with one of the projects being a film based on the game "Ouija Board." Corinne acquired a very brief rights window (for free) that allowed us to announce the project in the trades. 20th Century-Fox was interested, but we couldn't get past the hurdle of needing a much bigger producer.

Corinne dropped out to get married so I went at it alone. Then, Richard Albert called and asked me to help him develop a project based on a comic book. That became the film "G-Men From Hell." It was based on Michael Allred's very successful "Madman" series.

I suggested we have the credits be drawn by Michael Allred, which is fairly common now. Richard Albert decided that we premiere it at the San Diego "Comic Con," making us pioneers in using Comic Con to promote movie and television projects.

carry out the plan

I took a job at a record store to make ends meet. This helped me broadened my horizons regarding all types of music and increased my understanding of music as a component of the film experience.

I began working as background talent on some very successful television shows so that I could see how production worked. I learned what people did on set.

Then, one day I answered an ad for interns on a film called "Red Moon." I didn't make the cut. That was only to last a couple weeks though; it was a tough shoot and a lot of crew dropped off.They called, I was in.

It was fantastic, I loved it. We were shooting at the former DeMille Studios and it had all that old Hollywood feel including a re-creation of the Tara mansion from "Gone With the Wind." The film was renamed "Vicious Lips."

That is how I met and began to work with "B" movie auteur Albert Pyun. Albert was really a mentor to me in that I watched how he approached story and worked with talent both on and off the set. How to be creative in the moment. With no time and money he still came away with something unique.

I also worked with Producer Tom Karnowski, who showed me how to schedule and budget to maximize your production dollar.

They gave me a lot of opportunities and I became a part of their team.

This led to my positions at Cannon Films and 21st Century Films where I worked for indie movie legend Menahem Golan and met and worked with Producer Marc Fischer. They rounded out my education about certain aspects of the movie business. 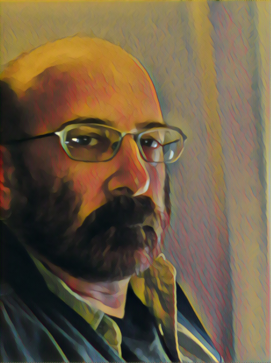 Put out the best version

Things at 21st Century began to change and two things happened: I left the company and Richard Albert took the project back, deciding to produce it under his Sawmill Entertainment banner. We developed it as far as we could and he took it out to look for financing.

Unfortunately the money came with the stipulation  that the project couldn't have a first time director. I shifted to the position of Co-producer/Line Producer.

Richard Albert promised me the next one. That project was "The Criminal Mind" and keeping his word, I directed the film.

I Currently have many projects in various stages of development and am always interested in discussing with others their entering the entertainment industry. Whether as a Producer or a Production Assistant, I would be glad to share what I know.

If you are interested in Financing (Executive Producing) a project of mine, I would greatly enjoy speaking with you. Unlike most things that are manufactured and sold, films usually revert to the owners after a set period and can be resold again and again. This makes them a very unique investment.

Gather your information  and create your plan

I was born and raised in South Bend, Indiana and grew up next door to the University of Notre Dame in the incorporated neighborhood of "Indian Village." I rode my bike, played ball with the other kids in a vacant lot, created a lot of worlds in the fields surrounding the village and swam in the university lake.

In the middle of my Sophomore year of college I took a break. I didn't know what was next.

I took a look at what I might be good at and of course decided that I should get into the movie business. No one I knew was in entertainment, but, oh well. I checked out the Berkley film program and decided it was not going to give me the skill set I would need. A new plan required.

I decided to return to Indiana University, this time at the Bloomington campus and entered the field of study of Telecommunications. Even though this was a television program, it allowed me to design my own minor, which I did. I studied film aesthetics, film history and the impact of film on the culture. This included studies about  women and minorities in film. I watched a lot of movies.

I graduated from IU with a BA, I married my wife Michelle on a Saturday, and then we headed for Los Angeles on the following Wednesday. No job, no connections in Hollywood.